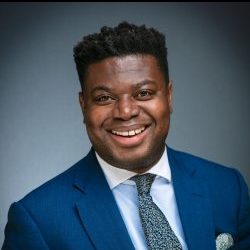 Richlove Mensah is Department for International Tradeâ€™s Regional Director for Trade and Investment in Central and Eastern Europe. Based in Warsaw, he provides leadership and strategic direction to ten teams across the region: Bosnia-Herzegovina, Bulgaria, Croatia, Czech Republic, Hungary, Poland, Romania, Serbia, Slovakia and Slovenia.

Prior to joining DIT he worked as an Economic Adviser at the UKâ€™s Department for Transport (DfT) where he had the responsibility for setting the strategic direction of the departmentâ€™s analytical work on international trade and investment.

Prior to this, he worked at the Foreign & Commonwealth Office (FCO) as Head of Global Economy and G7 Foreign Affair sous Sherpa, where he was directly involved in international G7 negotiations.
Before joining FCO, he worked as the Head of DfTâ€™s Better Regulation Unit, where he had the overall responsibility for the quality of the Departmentâ€™s Regulatory Impact Assessments.
He has also held two positions at the UKâ€™s Business Department, including as Trade Economist. He represented the UK in this capacity at the WTO, OECD and the EU.
He studied Economics and Politics (BA) at Manchester University and International Economics (MSc) at Lunds Universitet in Sweden.

Importance of Mining within the UKâ€™s Clean Growth Strategy