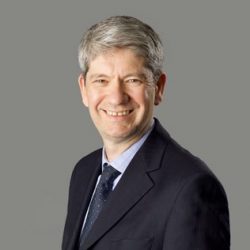 Stephen Gifford joined the Faraday Institution in March 2019. His focus is on making the organisation the go-to place for insights into the technological, economic and social benefits of batteries and electrical energy storage. He is developing techno-economic models of supply, demand and cost, covering both global and the UK markets.

Stephen has over 25 years of economics experience, including as the Chief Economist at Grant Thornton, the Director of Economics at the CBI and as a senior economist at KPMG, Oxford Economics and the Prime MinisterŌĆÖs Strategy Unit. Prior to joining the Faraday Institution, Stephen was Head of Economic Regulation at the Civil Aviation Authority, where he focused on the regulation of Heathrow and Gatwick airports, and the development of the new runway at Heathrow. Stephen is currently a Commissioner in the National Infrastructure Commission for Wales.

Stephen brings particular skills and expertise in economic policy, transport economics, infrastructure, market assessment and the role of the public sector. He has a first-class degree in Economics from the University of Liverpool and a MSc in Econometrics and Mathematical Economics from the London School of Economics.

Lithium, cobalt and nickel: the gold rush of the 21st century

ŌĆó Ending UK sales of new vehicles running on diesel and petrol by 2035 will massively increase demand for lithium, cobalt and nickel used to manufacture electric vehicle batteries
ŌĆó To satisfy demand for EVs, in 2035 global demand is likely to be around 450 kt cobalt, 2,500kt LCE, and 2,800kt nickel, under a projection of 3.9 TWh of global EV battery production.
ŌĆó Global production of lithium cobalt will need to increase by 5 times and 3 times respectively between 2018 and 2035
ŌĆó Global markets for raw materials should be able to deliver the demand.
ŌĆó But action is needed now to iron out likely bottlenecks in supply chains.